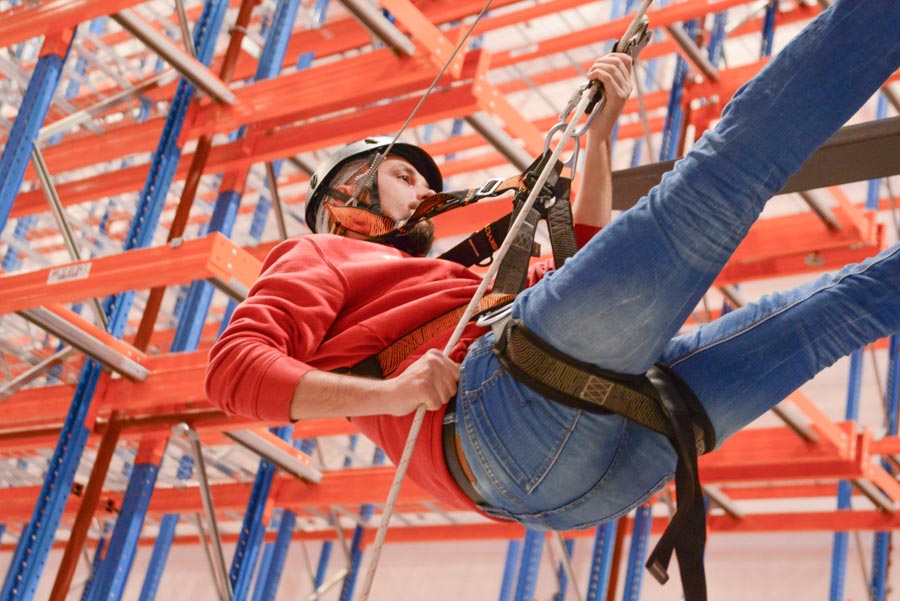 Training for emergencies – High ropes garden in the warehouse

A 2-day training course for a forklift, really? That’s right! After all, the new high-bay forklifts can pick orders at heights of up to 14 metres. In order to practice for an emergency malfunction, a special in-house training session was held last week. For some time already, our new warehouse facility has stood proudly at a height of 16.5 metres, which is pretty tall. Safety comes first, as they say! So three colleagues and I headed off to attend a forklift training course and learn how to operate a state-of-the-art high-bay forklift, not to mention how to behave correctly in an emergency. 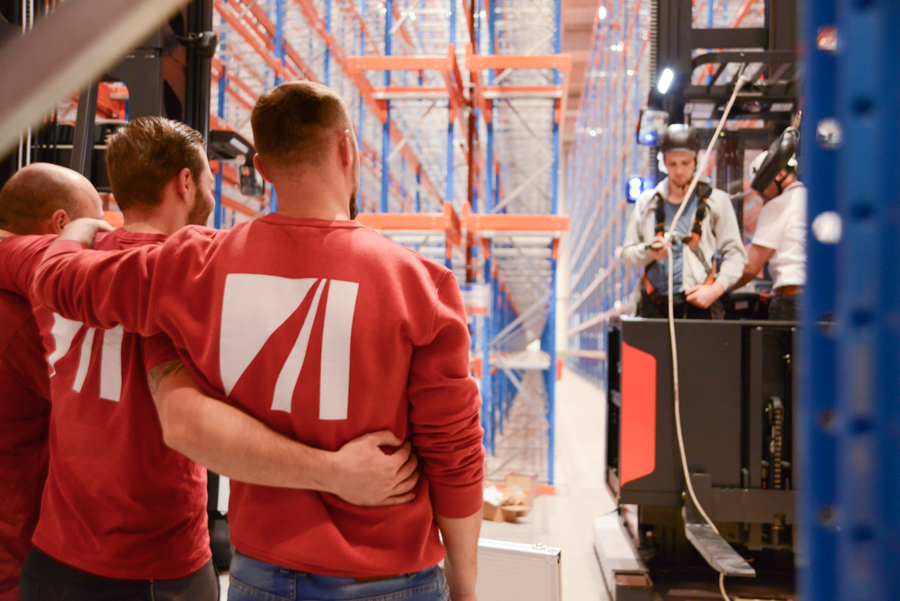 The aptitude test started in earnest on 11th October 2018 when the time came for the medical suitability test at occupational health and safety company B·A·D. My colleagues and I headed off from Heusenstamm towards the town of Seligenstadt, where the test was to take place. Testing our suitability was the main objective: in other words, our head for heights. However, vision and hearing tests also formed part of the health check, as did an ECG.

After my colleagues and I had passed the test with flying colours, we got back to preparing for part 2 of the aptitude test.

Back to school – The theory of driving a forklift

After I was informed that I had passed the health test, I progressed to the theoretical test. The firm Suffel provided us with a training instructor who helped us to commit the theory to memory. He also showed us how to use the safety harnesses in the event of an emergency.

The theoretical section started first thing in the morning. Certain rules and regulations such as only stopping the forklift with the fork lowered or not stopping the forklift in front of emergency exits or fire-brigade access routes were already familiar, although others were new to us. For example, in the case of abseiling, a hanging trauma can occur. If the first signs become noticeable, an emergency doctor must be called immediately. This can result in suspension trauma after as little as 15 minutes.

Of course, we successfully passed this test as well.

The practical portion of the test now followed hot on the heels of the theory. You could sense that the nerves were starting to take hold. Except for me, of course. I was the very picture of poise. OK, all jokes aside! I felt at least as much trepidation as the others. But I was also looking forward to this test of mettle.

Admittedly, I did feel a little queasy when it came to donning and using the safety harness correctly. Nonetheless, as the first to the plate, I wanted to set a good example. I tightened the belt and practised in a standing position to get a feel for how the abseiling technology actually works. After a few practice runs, I went up a level – quite literally.

At this point, I can safely say that a height of three metres looks much higher from above than from below! Once at a “safe altitude”, I started to feel slightly strange. This wasn’t so much down to the height itself, but rather the loss of control. I definitely had to muster a good deal of trust to clamber out of the cabin and let myself drop backwards and head first into the harness. Although I was pretty anxious, I had to hold my nerve until I finally got my feet back on terra firma again. Anyway, I’d always wanted to know how it felt to be Spider-Man. 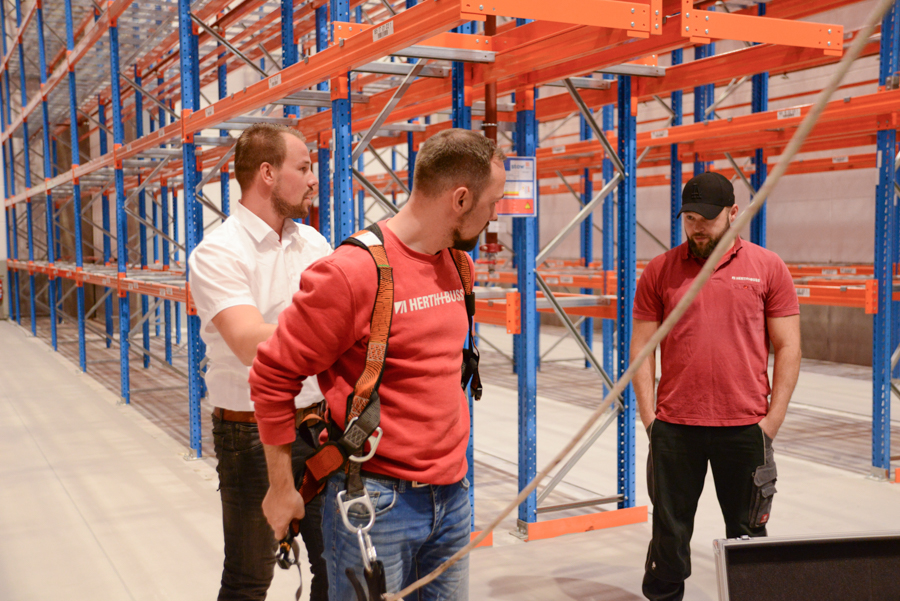 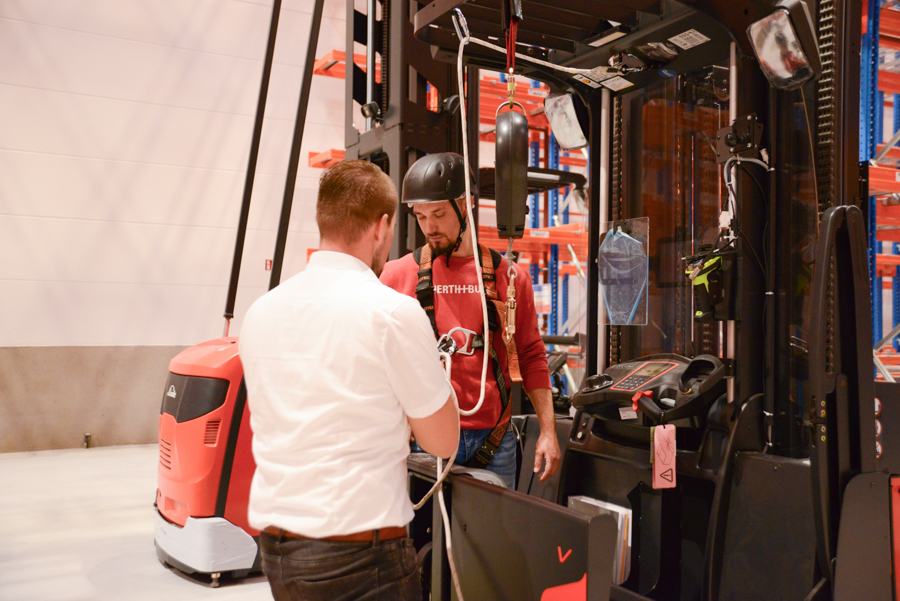 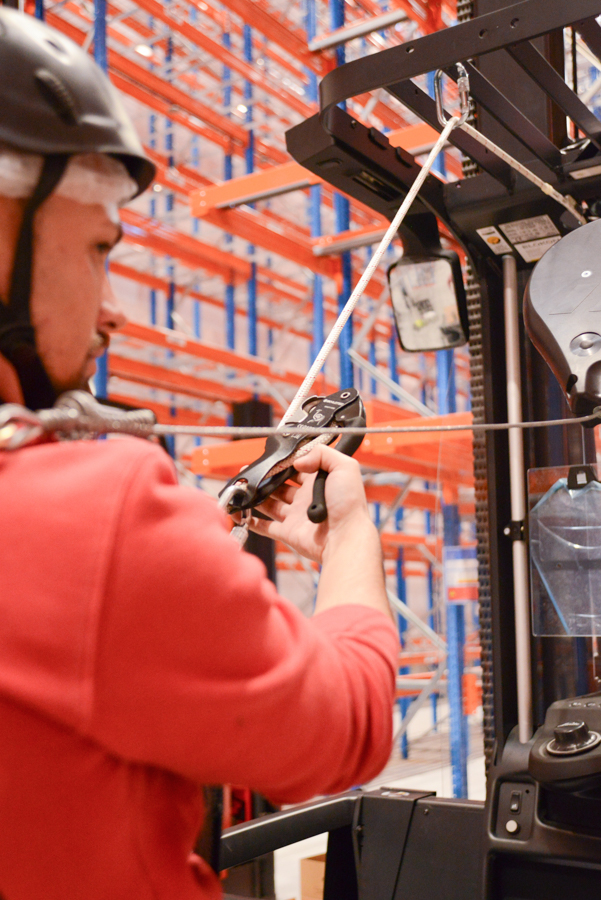 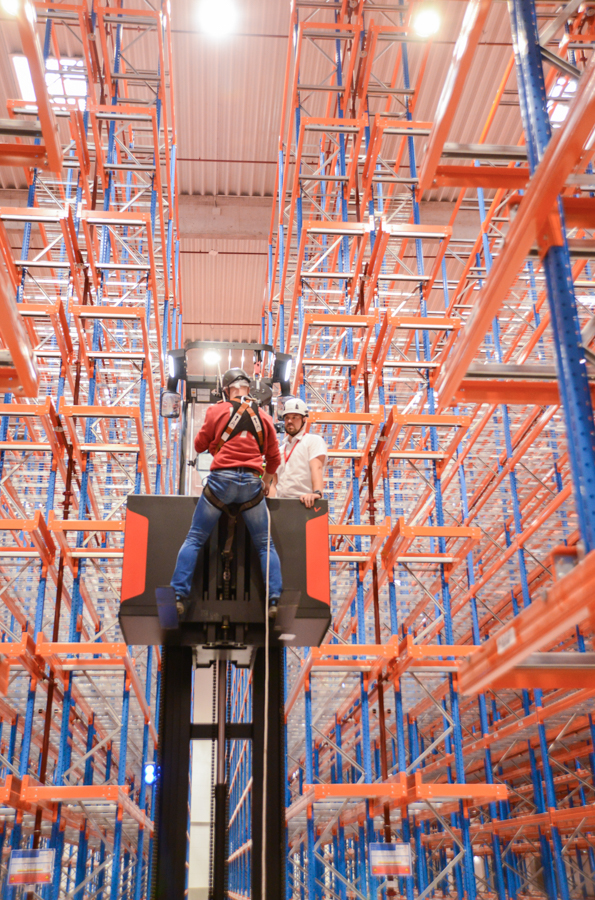 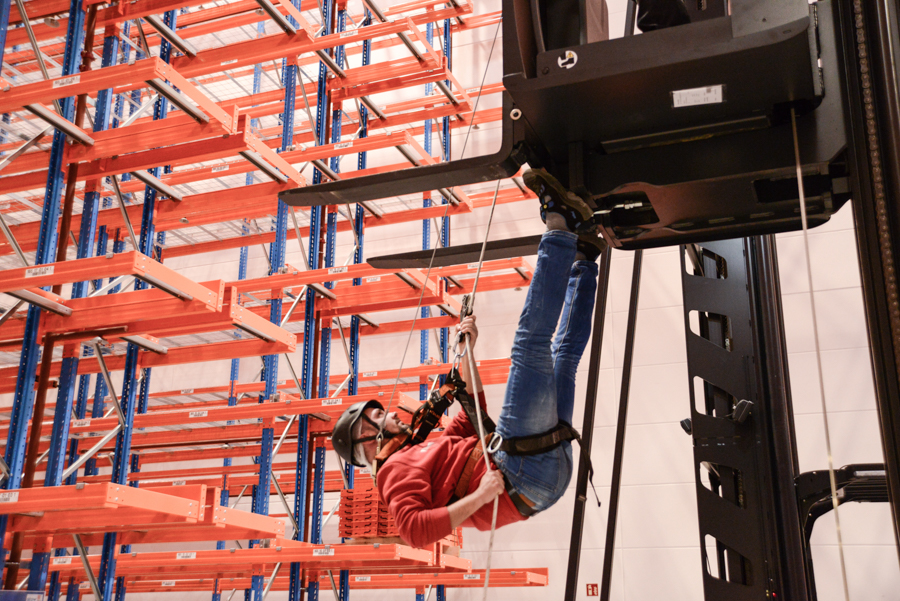 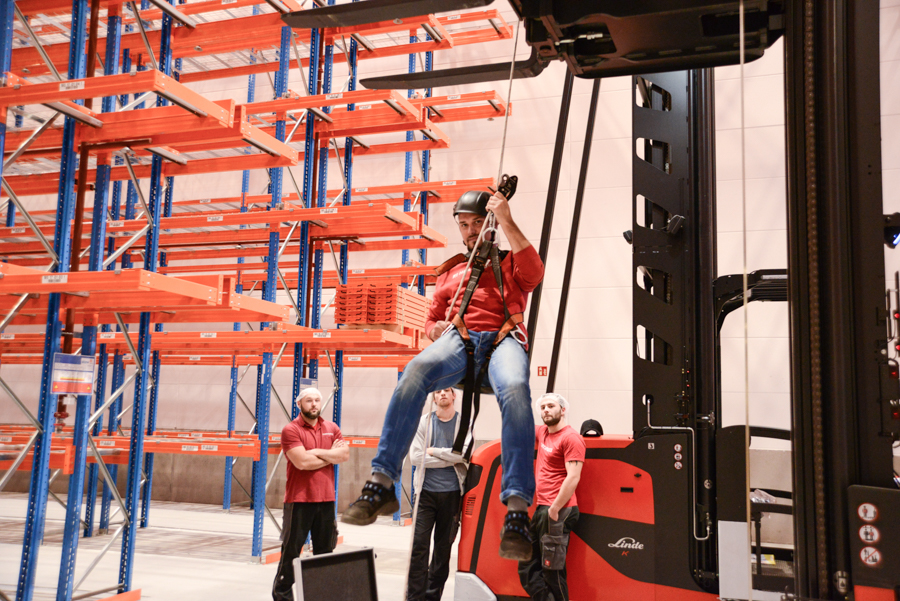 Through narrow aisles at high speed

After the training course, we still had to learn how to drive the hulking logistics trucks. I have to admit that this was unimpressive at first because the narrow-aisle forklifts and high-level picking trucks automatically drive in a straight line. This allows you to work much more efficiently.

Each one of us had the chance to operate the narrow-aisle forklift and raise it right to the top. I have to say that it was a fantastic experience to ride up to a height of 14 metres. From up there, everything looks quite small and you feel like you’re in your own world.

After that, it was time for us to use the picking truck, with which we could also occasionally depart from the induction loop. For the benefit of all logistics novices: the induction loop guides the forklift automatically through the aisles. In other words, the trucks are driven more or less autonomously.

My verdict on the training

I really had fun finding out whether my health was up to driving the forklifts – and whether I was up to mastering the practical section of the training. Obviously, my personal highlight was seeing the warehouse from a giddy altitude of 14 metres.

One thing is definitely for sure: our logistics processes are constantly changing to become even better, faster and more efficient. No single task has been able to stop me in this regard, and I look forward to every challenge. 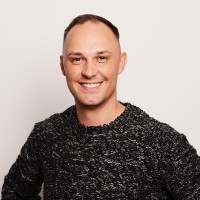 Hi, I’m Alex and I’ve been working at Herth+Buss since 2012 as a Warehouse Clerk and Deputy Team Leader in Incoming Goods. The most exciting thing about my varied l ...