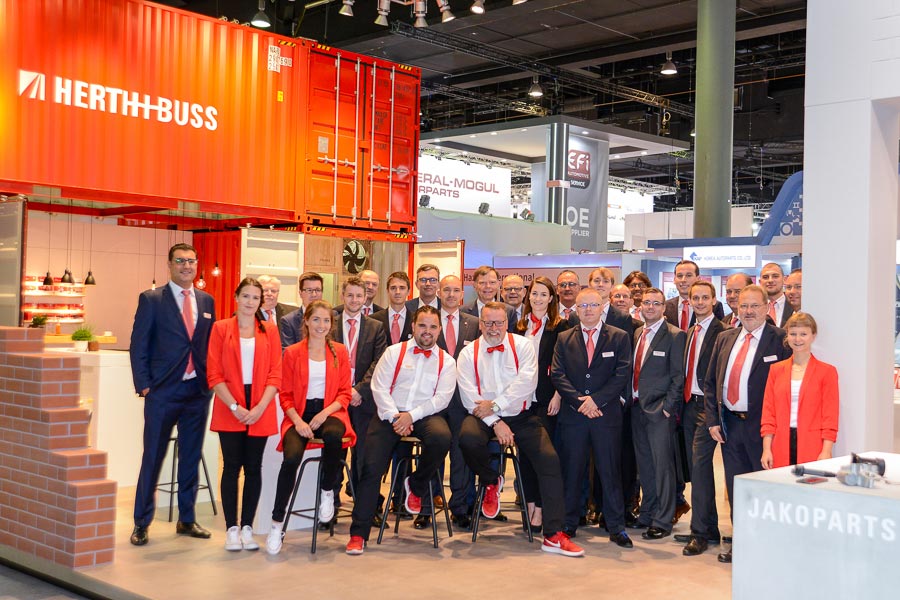 Automechanika 2018 – From planning to finished stand

This year, it all started with a rough idea once again; an idea that consisted of fairly large elements which had been unheard of up until that point. Even our stand builder had to take a deep breath! The idea gradually took shape before eventually becoming the head-turner of Hall 3! The unique trade fair stand stood proudly for all to gaze upon at Automechanika 2018 in Frankfurt between 11 and 15 September.

How an idea was brought to life

As soon as it became clear that I would be responsible for planning our trade fair stand for this year’s Automechanika, I came up with some very varied ideas within a short time. However, one of those in particular became entrenched in my brain. I presented it within my team and we were all quickly in agreement. We were convinced that it would definitely elicit the appropriate response and set us apart from the crowd: gigantic, red shipping containers with Herth+Buss branding – why ever not?

I was initially unsure how feasible it would prove to implement. After all, the logistical effort involved in moving four large containers shouldn’t be underestimated, particularly within the time allocated for construction. I had to set up a meeting with our partner and stand-builder of many years, Löser, to answer all of these questions concerning logistics and general feasibility. No sooner said than done!

We fleshed out our idea some more before the meeting in October 2017 (that’s right, planning for Automechanika actually begins almost a year before the big event). A number of elements such as furniture, product-presentation exhibits and many more were added to the mix. We thought hard about the main statement we wanted to make with the theme of the stand and how the containers could be practically incorporated. 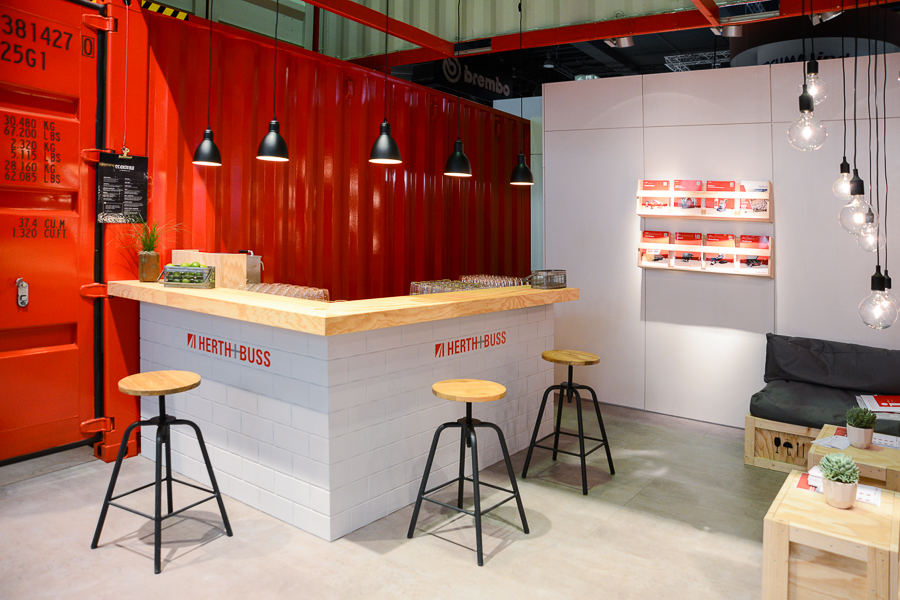 Authentic. Genuine. In the traditional red. A sneak peek at the bar below the container wall.

However, this step turned out not to pose many problems. The combination of international trade and our origins and tradition as a family company could be effectively combined with the currently ubiquitous industrial style. That isn’t just highly on-trend and modern, but was also a very good conceptual fit which ensured that the stand made a harmonious impression.

So, once this idea had matured and it became clear that we could actually bring it to fruition, it was time to convince the management of our concept as well. 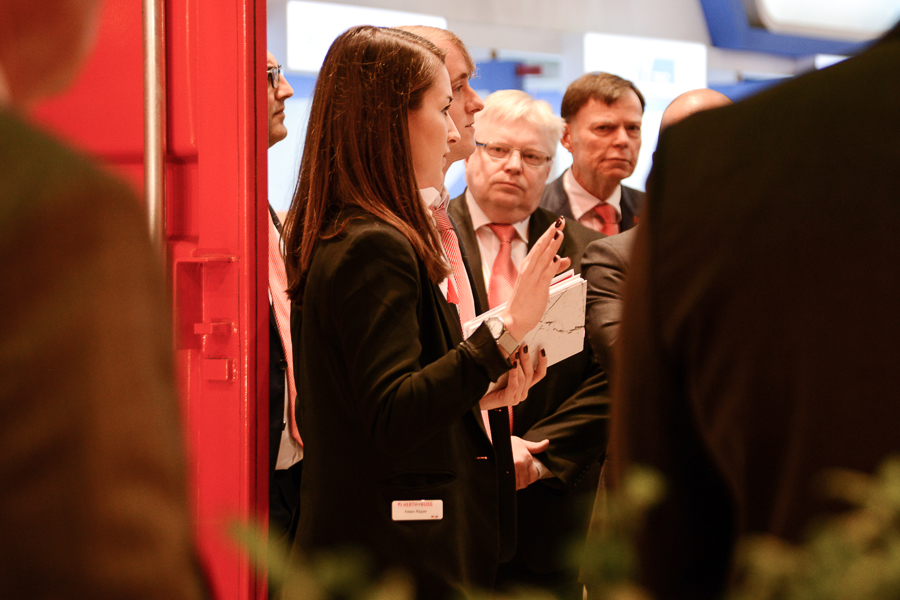 Our stand concept for Automechanika 2018

Our company is always working towards the future. That’s why our management has never shied away from innovative ideas. After all, we want to stand out from the crowd!
And that is precisely the philosophy behind our modern stand concept: to present the “real” Herth+Buss without losing the reference to our core area of expertise.

First and foremost, Herth+Buss should appear as a parts supplier, logistics expert and future-oriented family company. Our most eye-catching features – the red shipping containers – provided the intended long-distance impact, which we enhanced in the front area of the stand through the addition of a building element. The genuine containers gave visitors the feeling of being a part of everyday working life at wholesale retailer Herth+Buss. 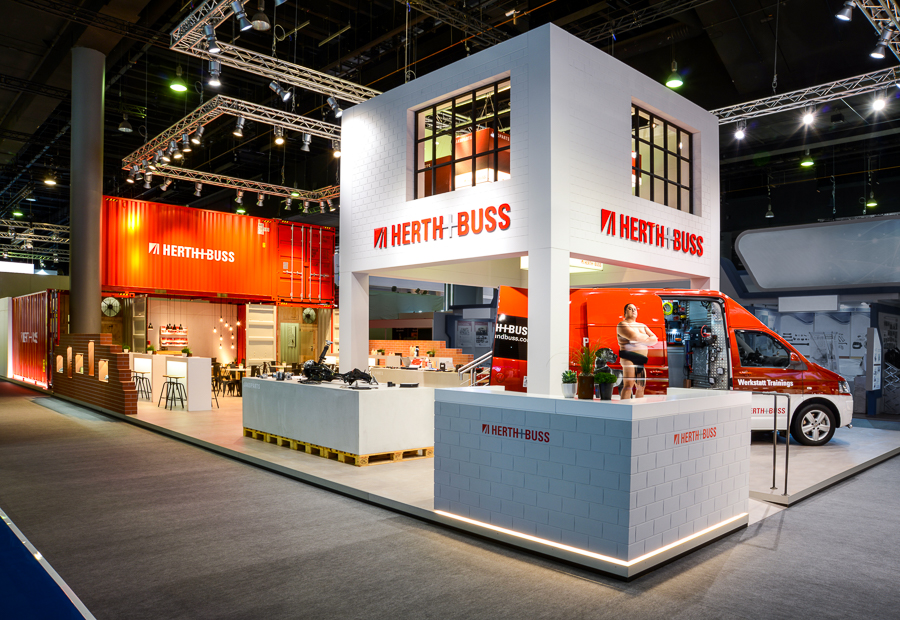 Ta-daaaa! The finished stand in all its glory.

A mixture of past and future!

We rounded off the overall concept by combining it with industrial-chic furniture elements. The furnishings borrowed from “old” functional materials and designs taken from 20th-century factories.

Real treasures such as the original lamps in our meeting rooms could be effectively combined with modern elements. As a result, we were easily able to stylistically capture Herth+Buss’ history; after all, Herth+Buss has been around since 1925! (And we’ve been appearing at Automechanika since 1971.)

We fleshed out the basic structure with high-tech flourishes and a large, hands-on product-activity area. This year, it was once again important to us that visitors could closely scrutinise our two product ranges, Elparts and Jakoparts. The workbenches were included for this reason – and it goes without saying that our trusty Workshop Field Service van was also close at hand! 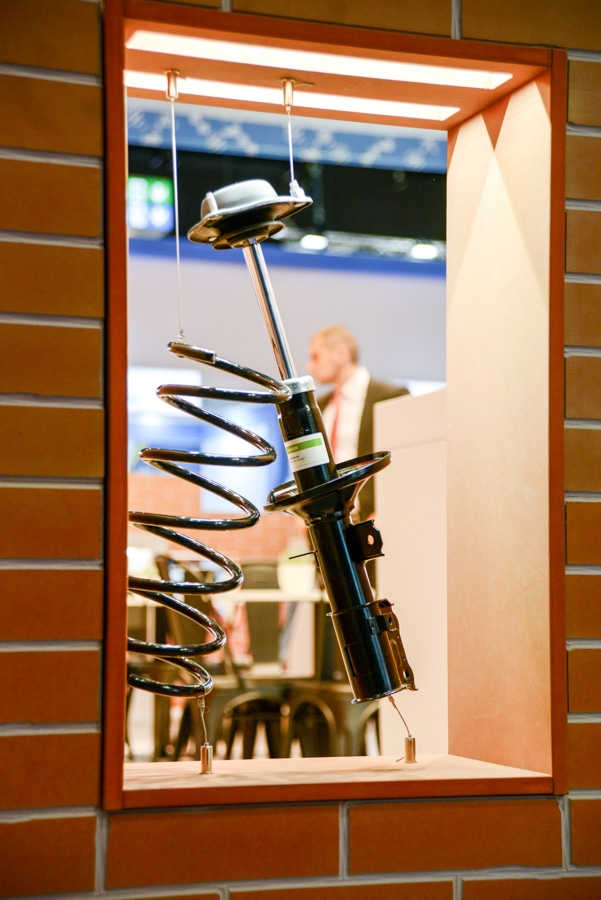 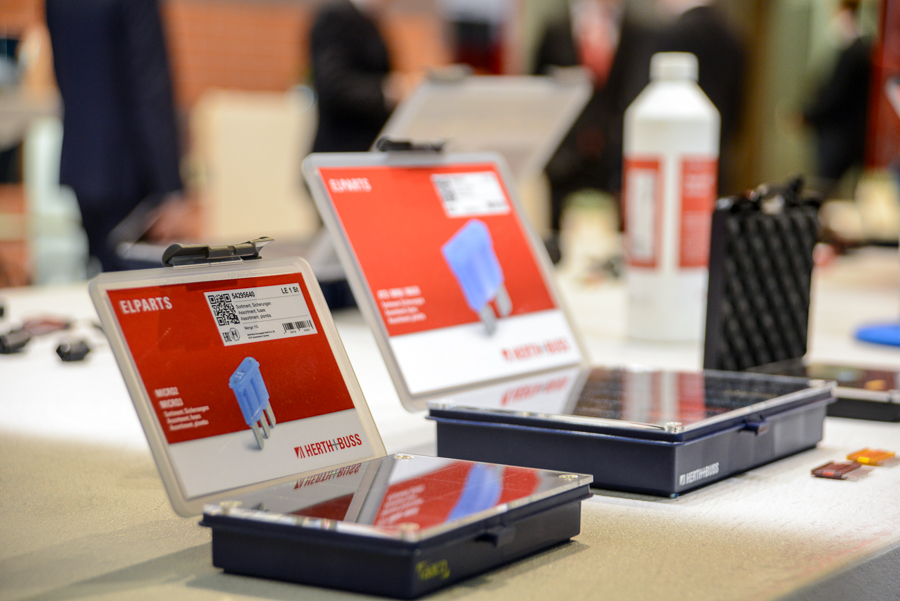 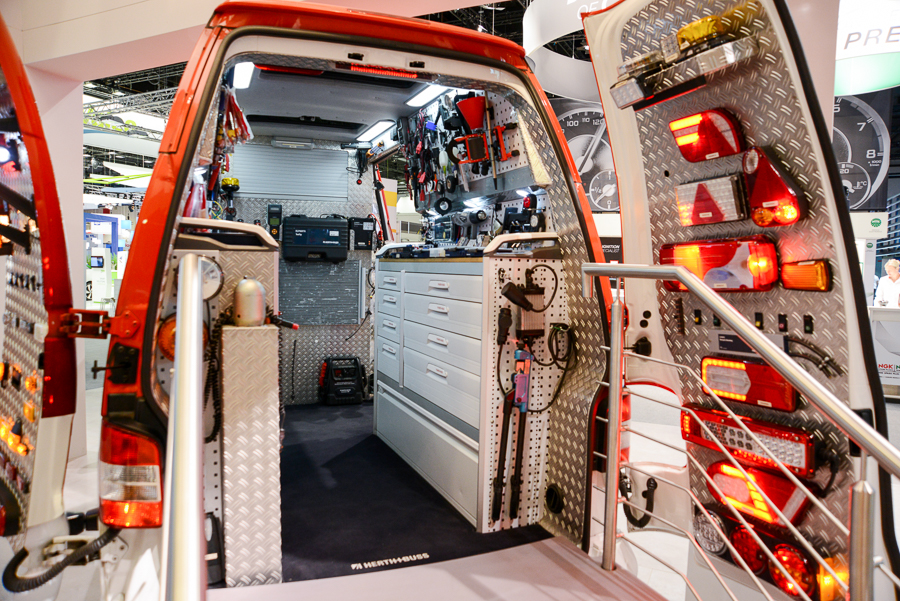 Furthermore, we demarcated our stand with walls of products on the left and right in the style of brickwork. There, we positioned additional products that were intended to grab the attention of passers-by.

Our three core areas of expertise were also presented on our image wall: “logistical excellence”, “quality and service from the specialists” and “smart service that goes the extra mile”. Using the appropriate QR code, visitors had the chance to watch the brand-new Herth+Buss corporate film in full! 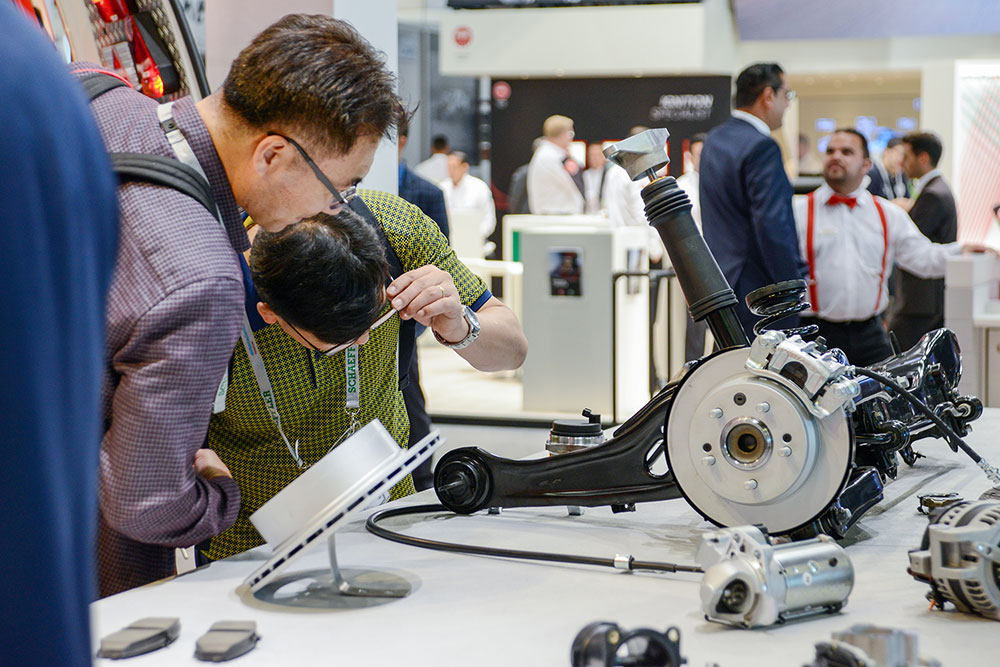 Numerous articles from Herth+Buss’ product portfolio were on display for visitors to admire.

Our bar area provided exotic highlights this year, with our barmaid serving up good cheer and tasty refreshments over three days at the trade fair! 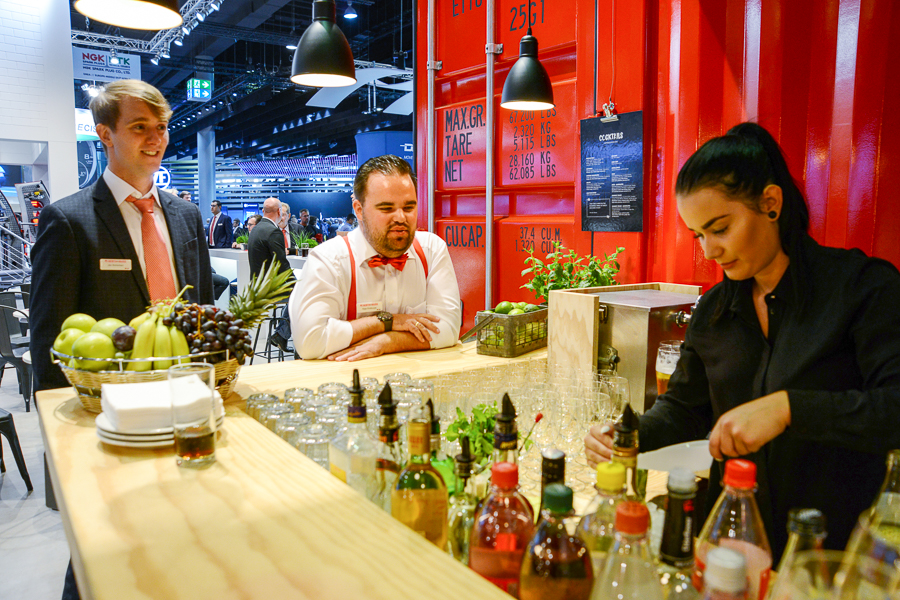 The feedback we received showed us that we had once again created an appealing and innovative stand concept this year! We would like to express our sincere thanks again for all of your positive reactions!

We are already looking forward to planning a new and original trade fair stand in 2020.
But for now, we’ll stick to looking back on 2018. 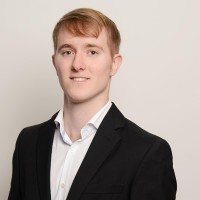 Hello, I'm Jan and I've been working at Herth+Buss since 2009. After sitting my school leavers' exams with a focus on media and design subjects, I started my vocational tr ...