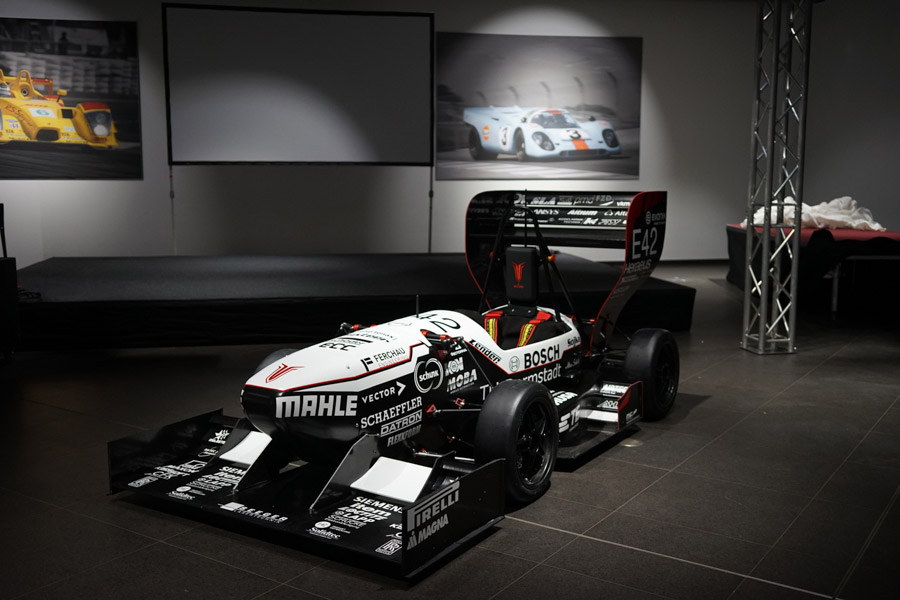 The TU Darmstadt Dart Racing Team – From a blueprint to a finished racing car!

On 8 May, we at the TU Darmstadt Racing Team formally invited visitors to the rollout of our electric racing car, Ny 2018, and our autonomous vehicle, Lambda-D 2018! To mark this occasion, I’d like to give you a glimpse behind the scenes of the manufacturing process for the two cars.

From the drawing board to the workshop

This time around, the start of the manufacturing phase coincided with the turn of the year. On 2 January 2018, when we found out that the milling of the “positive” for our monocoque had been completed, we could finally start to manufacture our car. The monocoque is essentially the body of our vehicle and one of the car’s most complex parts. In our design, this consists of a single-piece structure made of carbon – or carbon-reinforced plastic, to be specific. 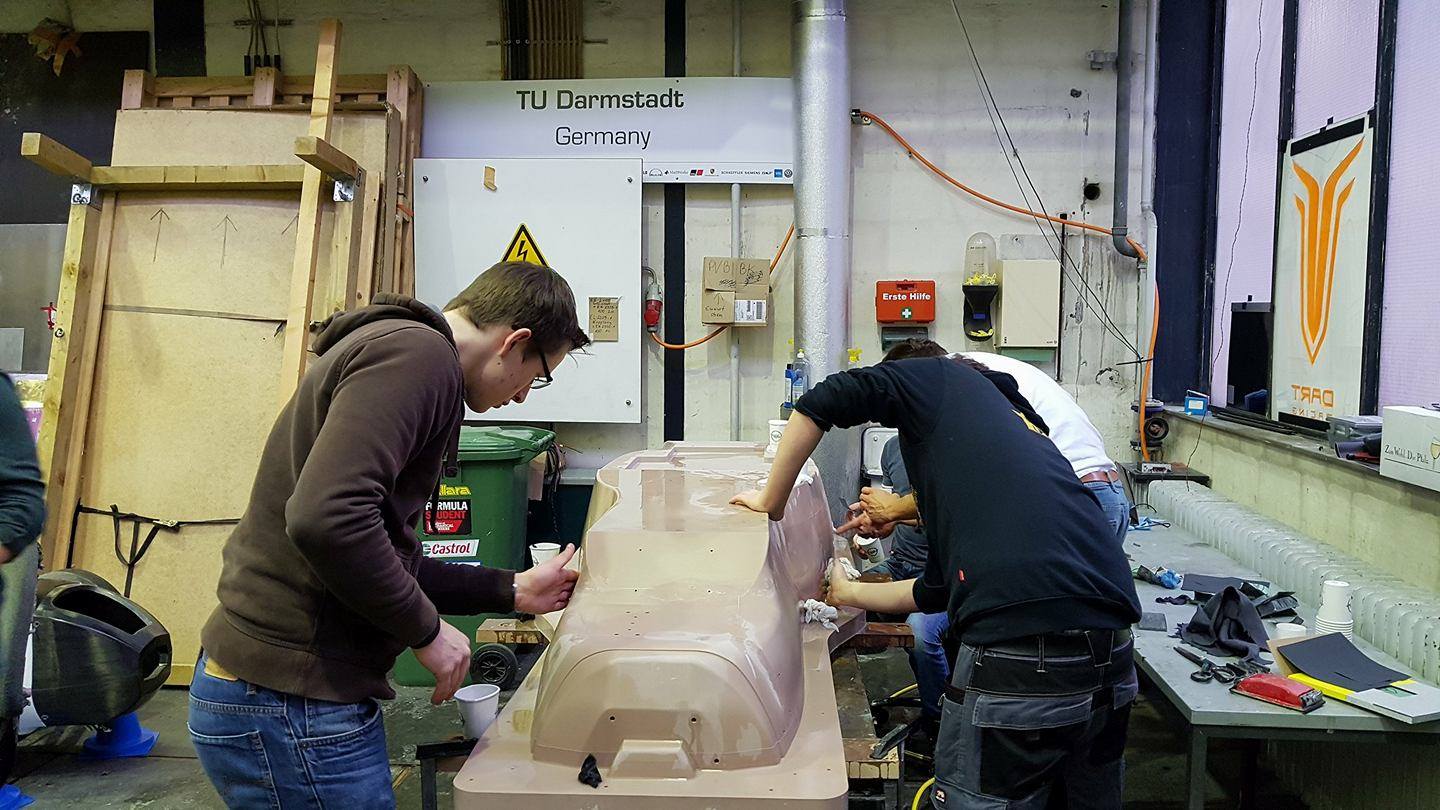 The students of the TU Darmstadt work on the block made of special molded plastic.

The advantage of this is having superior mechanical properties compared to steel, yet with a significantly lower weight. On the other hand, its workability is a weak point. A great many working hours are required to manufacture the monocoque, which is why we spread the labour across all members of the team. In doing so, this enabled us to keep the effort required from each individual member as low as possible.

First, the desired geometry was milled from a giant block of special mould-making plastic. The milling process resulted in two moulds which made up a copy of the geometric shape designed on the computer. In turn, we used this to create two “negatives”, which we bolted together on a single flange to enclose the part from the outside. Finally, the carbon and an aluminium honeycomb core were shaped from the inside, vacuum-packed and fired in a high-pressure oven. This process was completed in March, when we were able to remove the part from the mould and add the finishing touches. 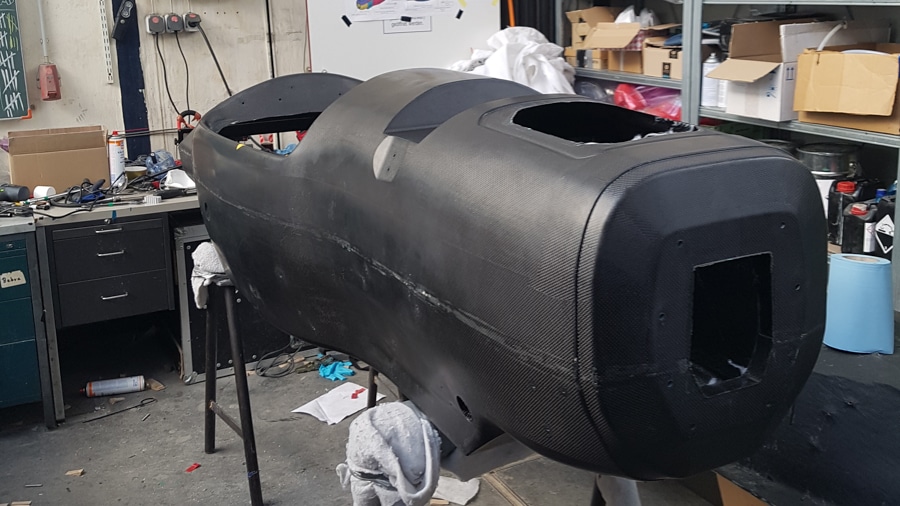 At the end of March the Monocoque is finished.

Alongside the production of the monocoque, we had another hurdle to overcome in spring: the event qualification. There are only ever a limited number of places for participating teams, so these places were assigned through a qualification process. To this end, each team had to take part in a quiz and, in the process, answer questions on certain rules and principles of engineering. The teams who made the fewest errors and were the fastest to complete the quiz successfully qualified for the event in question.

Our quiz marathon started on a Saturday with the quiz for the Formula Student Event in the Netherlands. We didn’t get off to the best start by failing to qualify for the event.

But you always learn from such setbacks. That’s why we chained ourselves to our desks in the team offices for a week, where we prepared for the next quiz from sunrise to sunset. What was first received with a little reluctance ended up bringing the team closer together. The following Monday, we kicked things off with breakfast together in the corridor. Afterwards, our team offices turned into a kind of NASA mission control full of screens, behind which all team members worked together in smaller focus groups. After three quizzes on one single day, we were finally able to reap the rewards for all of our hard cramming.

Over the coming months, the two cars made by our team will go on a tour through the heart of Europe. For the Driverless Team (with the autonomous vehicle), the trip will start in Italy, after which both teams will meet again for the Formula Student East Event in Hungary. After Hungary, the Driverless Team will return to Germany in order to prepare for the event at the Hockenheimring circuit. Meanwhile, the Electric Team will stop off in Spielberg, where it will participate in the Austrian event. After this, both teams will meet again for the highlight of the season in Germany. To bring the season to a close, the Electric Team will travel to the Formula Student Event in Spain. As you can see, we still have quite the little road trip to look forward to this year with our cars.

The road to the rollout – A chassis becomes a car

With the completion of our chassis, all remaining assemblies could finally be put together and installed. To a large extent, these are manufactured at our sponsors’ facilities before being assembled in our own workshop. In addition to manufacturing such parts, sponsors also support us by putting invaluable consumables, specialist knowledge and tools at our disposal. Without sponsors such as Herth+Buss, it simply wouldn’t be possible for us to build our cars in the first place. In the period before the rollout, when 50 students need to finish the parts they have designed, solder and test circuit boards, not to mention commissioning the drive train of the vehicle, the workload of the team increases dramatically yet again. Part by part, a car emerges which can eventually be unveiled to sponsors, representatives of the university, family, friends, classmates and colleagues at the rollout ceremony. 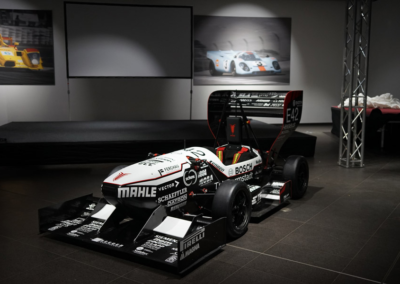 The Ny 2018 is the result of the Electric-Team. 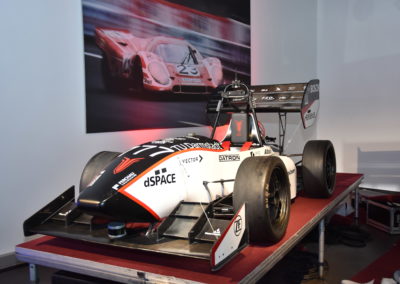 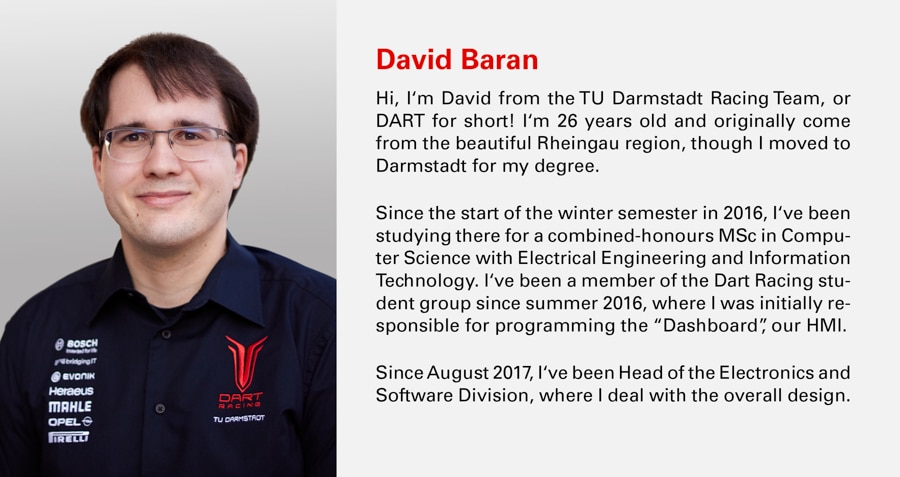 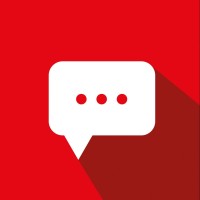