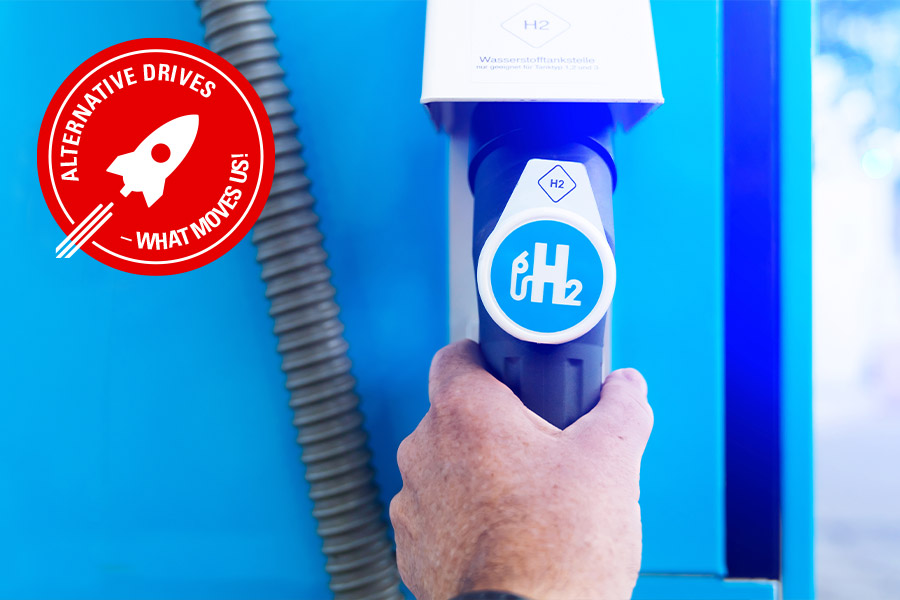 Hydrogen: Energy source of the future?

In the periodic table of elements, the symbol for hydrogen (H) is at the top. So it must be a relatively important element. In fact, hydrogen is the most common chemical element in the universe: Hydrogen is a component of water and almost all organic compounds. Hydrogen is also an energy source. An energy source that generates no carbon dioxide and practically no exhaust gases during burning. In contrast to conventional fossil fuels, hydrogen would therefore be a particularly suitable fuel for the car of the future, wouldn't it? Well, the matter of hydrogen is not that simple.

People who talk about hydrogen as an alternative energy source for the mobility of the future are usually referring to fuel cells. The fuel cell converts hydrogen into electrical energy for electric vehicles. Despite its lower efficiency, fuel cell vehicles therefore represent an alternative to battery electric vehicles (BEVs) - after all, the fuel cell offers around double the efficiency compared with combustion engines. In contrast to BEV vehicles, it is possible to refuel within a few minutes without having heavy batteries on board.

In any case, the German government favours hydrogen as an alternative energy source. "Germany is becoming a hydrogen country", explained Minister of Transport, Andreas Scheuer recently. "We're expanding our H2 funding on a large scale". So it's an advantage that hydrogen is amply available.

The disadvantage is that hydrogen only occurs in bound form, i.e. as part of chemical compounds. In order to be able to use hydrogen as an energy carrier, the gas first has to be extracted from water. This is often done by electrolysis. In this process, water (H2O) is broken down into oxygen (O2) and hydrogen (H2) using electricity. Only if the electricity used comes from renewable energy sources can the process and thus the hydrogen obtained be deemed truly CO2 neutral.

However, a look at the current registration figures shows that numbers will remain relatively low for the foreseeable future. A total of 208 fuel cell vehicles were registered in 2019. The reason: The expensive production of fuel cell vehicles. In addition, there is no hydrogen tank infrastructure in Germany as yet. The fuel station network could be used here. Particularly because the hydrogen tank process is practically identical to conventional fuels.

Prof. Christian Mohrdieck, responsible for fuel cell development at Daimler AG, does not expect a rapid breakthrough in fuel cell technology: He believes that it will take a few years for the relevance of the fuel cell to increase, but that we will certainly see a rise after 2025. The fuel cell should then be of particular relevance to the transport sector. As some manufacturers are currently relying on fuel cells to drive the trucks of the future. "This will also help to generate moderate volumes that are essential for reducing costs," says Prof. Mohrdieck.

But one thing is certain: The fuel cell will remain a niche technology in the coming years. Whether in cars or in trucks.