The automotive industry has been addressing the issue of refrigerants for a few years now. The refrigerant R1234yf introduced a few years ago is still highly flammable. And the gradual shortage of the old refrigerant R134a poses increasing challenges for vehicle operations.

Since 1 January 2017, the use of the refrigerant R134a on new vehicles has been prohibited due to its high greenhouse potential. Since then, the refrigerant R1234yf has been primarily used in new vehicles. There were many concerns, even before the launch of the more environmentally friendly refrigerant. R1234yf is highly flammable – the self-ignition temperature is 405 degrees Celsius. Experiments have shown that leaking R1234yf can ignite on the hot engine block. In addition, in the event of a fire, the substance produces the highly corrosive hydrofluoric acid.

Experts, such as trade associations in the rescue sector, now believe that R1234yf is not as dangerous in practice as originally feared. The ADAC stated to the Deutschlandfunk radio station: “Vehicle manufacturers clearly managed to install R1234yf in car air conditioning systems so safely that there is no risk of fire. The ADAC is not aware of a single case where there burns or poisoning would have occurred that could have been attributed to the use of the refrigerant."

The new refrigerant R134a – another worry?

While the new refrigerant therefore has fewer problems in practice, R134a, the refrigerant used in most used cars, is now a cause of concern time and time again among vehicle professionals. The trigger for this is the F-Gas Regulation 517/2014, which states that EU states must gradually reduce the production of the refrigerant R134a by up to 79 percent by 2030. With this step, the EU aims to significantly reduce gases with high greenhouse potential for the environment. The logical consequence: Due to the ever reducing availability of R134a, the prices for the refrigerant have increased dramatically. And even worse: R134a could not be supplied at all for a time. Bad for workshops – and even worse for drivers.

As a result, an illegal refrigerant trade has been established. “According to the corporate law firm Kroll, large quantities of illegally imported refrigerant (so-called HFCs, fluorinated hydrocarbons) have entered the EU market once again in 2019”, kfz-betrieb reported at the end of April.
Low prices always sound tempting – and are often taken advantage of. Many workshops may not be aware of the fact that they are filling up their customers’ vehicles with illegal refrigerant. As reports from various specialist media show, the distribution of illegal refrigerant, including filling an air conditioning system, can be punished with a custodial sentence of several years. Alarm bells should therefore always start ringing for vehicle professionals, particularly in the case of very low-cost offers.

A glimpse into the future

According to experts, vehicle operations should expect the cost of R134a to rise again from the start of 2021. And if the price for R1234yf continues to reduce at the same time, it could be an interesting option for vehicle workshops and drivers to convert to R1234yf with older vehicles. But as “Krafthand” points out, suppliers of such conversion solutions would have to clarify a few questions by then, especially regarding approvals and liability. The issue of refrigerant will therefore continue to concern us.

While the industry still has to answer a few questions in the near future, one thing is clear: With Herth+Buss, you will continue to receive all adapters for high and low-pressure connections – both for R1234yf and for R134a! 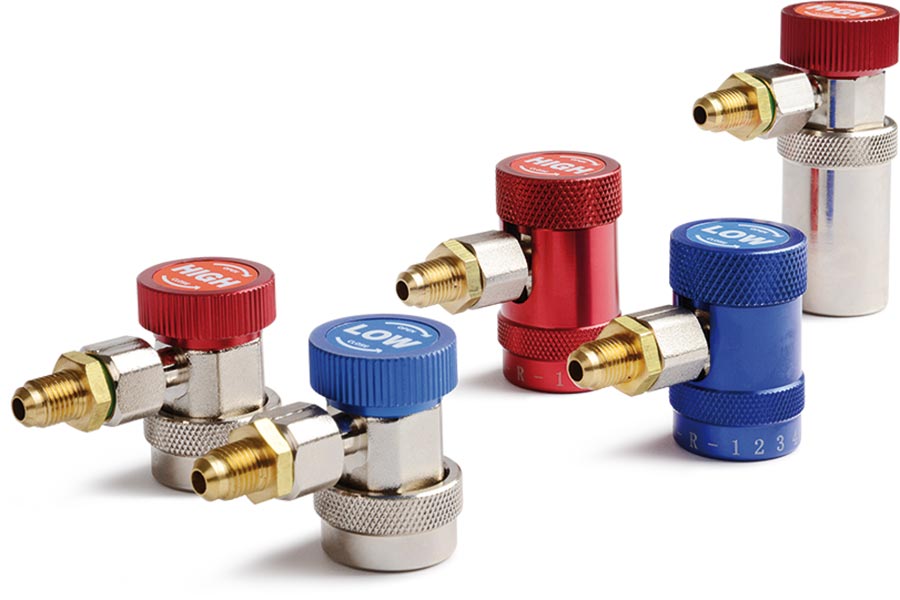