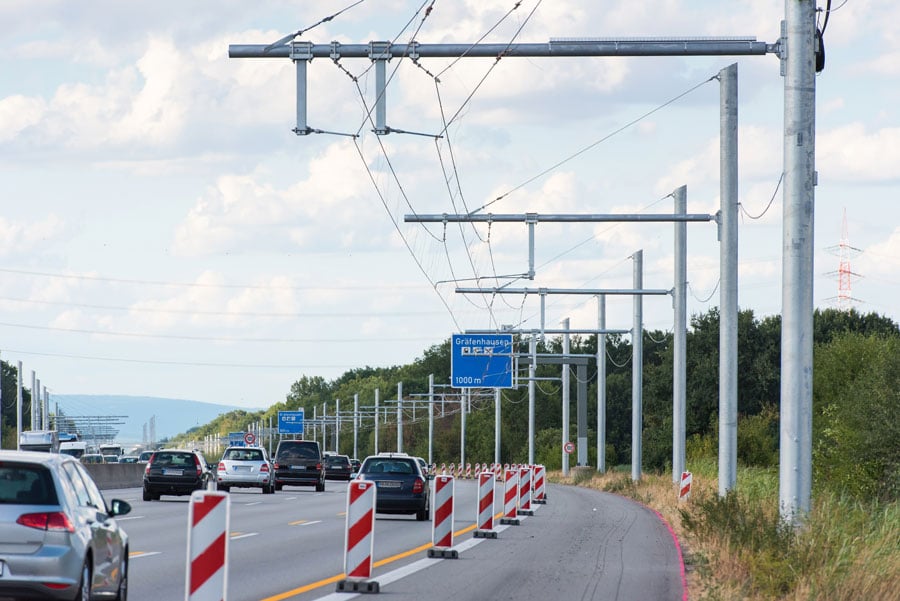 E-highway on the A5: Germany’s first test route for hybrid HGVs

Since May 2019 drivers on the A5 have been wondering about a 5 km stretch of road with overhead power lines amidst the motorway. What sounds a bit like science fiction is a pilot project for which Germany's Federal Ministry for the Environment is providing funding to the tune of 14.6 million euros. This project involves a test section a good five kilometres in length between Langen/Mörfelden and Weiterstadt. It is equipped with an overhead catenary line running in both directions above the motorway. This line supplies hybrid HGVs with electricity so they can recharge their batteries for the hybrid system.

We now explain in this article how all this works and what is planned for coming years in the freight transport sector in terms of e-mobility.

How the hybrid HGVs get their electricity

For more than two months Scania R 450 hybrid trucks from the Odenwald district have been shuttling back and forth to Frankfurt/Main-Ost along the e-highway of the A5, powered by electricity from by catenary lines. Here, on Germany's first test route for electrified HGVs, the operation of heavy goods vehicles supplied with electric power from overhead lines is now undergoing testing and analysis under real-life conditions. The roof-mounted pantographs installed on these trucks dock with the overhead contact lines installed along the motorway, so enabling them to recharge their batteries.

Initial analysis indicates that diesel consumption of these hybrid HGVs is cut here by as much as 10 percent or so. These fuel savings are made possible by the hybrid drive of the truck, which is equipped with an 177 hp electric motor and boasting a maximum torque of 1050 Nm. The power storage system takes the form of a lithium-ion battery with a capacity of 18.5 kWh, designed to ensure an electric-only operative range of between 10 and 15 km. When the power from the batteries is no longer sufficient, a 450 hp, 13-litre inline six-cylinder diesel engine then kicks in.

Why was the A5 chosen?

The section of motorway selected here is one of Germany's highways with the heaviest traffic volumes. It has been equipped with overhead catenary lines running in both directions over a length of five kilometres. Every day some 130,000 vehicles travel this section of road, with HGVs accounting for 10 percent of traffic. It is obvious why a stretch of motorway with such high volumes of traffic was chosen for testing. One of the objectives is to find out whether it is possible to influence the road traffic and if so, to what extent, and also whether this hinders the emergency services in their work.

Jens Deutschendorf, State Secretary at Hesse's transport ministry, has no doubt about the project with the impressive-sounding name of "Elisa" (the German abbreviation for Electrified Innovative HGVs on Motorways): "If the overhead line system works here, it'll work everywhere."

By 2022 the initial investment in the A5 project is to be followed by a further 15 million euros, earmarked for collection and analysis of all relevant data. But this one test section isn't all that's planned. The idea is to also trial the A1 motorway approx. 25 kilometres around Lübeck in Schleswig-Holstein to discover how the system would function with a traffic link to a port. And Baden-Württemberg likewise wants to put the system throughout its paces on the B 462 federal road at Rastatt to test its suitability for city through-roads.

What challenges is the independent parts market faced with by the development of e-mobility?

Should hybrid HGVs not only prove to be compatible with conventional motorway traffic, but also represent a cost-effective option for haulage companies, the various pilot projects may well catch on. E-highway trucks might help electromobility to break through in the goods vehicle sector as well.

This would also have an impact on the aftermarket and workshop business: Not only the suppliers and manufacturers of parts, but also garages would be confronted with a variety of challenges here. On the one hand, some suppliers could get ahead by becoming e-system providers and combining the electric motor, rechargeable battery packs and control into one system. At the same time, e-trucks and electric cars no longer require many components that are used in vehicles with a conventional combustion engine. Experts thus expect a contraction in the workload of automobile and truck workshops – and with it, a fall in sales. They however also point out that garages would then take over new tasks such as power electronics testing or changing the coolant in cooling circuits. In the case of hybrid HGVs, such work would also involve the pantographs.

Electromobility therefore does not just confront the aftermarket with risks, but also opportunities. At least for companies willing to embrace new technology. Whether this will necessarily involve hybrid HGVs remains to be seen.