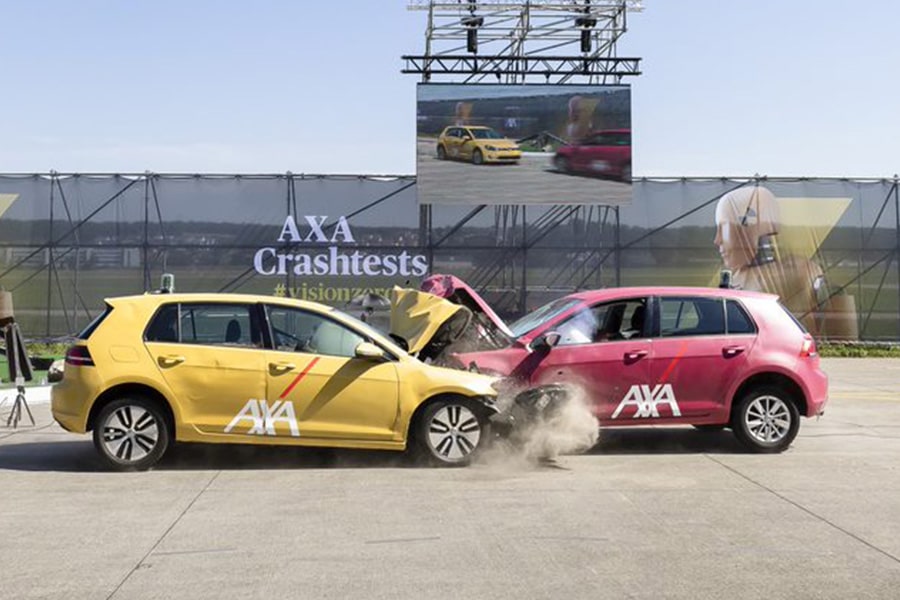 Accident researchers from the insurance company Axa assessed the behaviour of electric vehicles in the event of serious accidents in an in-house crash tests. The crash tests made massive waves. The test setup and sensational presentation of the results were criticised, among other things. We took a look at what went on.

Two crash tests carried out by Axa Switzerland analysed the weaknesses and risks of electric cars. A Tesla was also tested. One of the findings: The greatest risk of accidents for electric cars does not occur when reducing speed, but when accelerating. Michael Pfäffli, Head of accident research AXA Switzerland, explains: "Most electric vehicles, particularly the powerful ones, have a very high torque, which is immediately noticeable when the power pedal is tapped. This can lead to unwanted, jerky acceleration that the driver can no longer control." Experts call this as "overtapping effect".

The first crash focussed on a Tesla. The constructed scenario: The vehicle driver only taps on the power pedal for a short time and loses control over the vehicle due to its strong acceleration. As a result, the vehicle drives towards a roundabout at excessive speed, can no longer brake, drives over it and rolls over. The video published by the insurance company also shows how the vehicle catches fire after a few seconds.

Viewers may ask themselves how often this scenario would actually happen in reality. Undeterred, the insurance company states: "Dramatic crashes show: Electric vehicles cause more collisions than conventional combustion engines, particularly the powerful vehicles, due to jerky acceleration."

The independent Tesla online magazine Teslamag.de was particularly critical of the results. The obviously staged car fire and a number of very offensive statements were criticised, among other things, which cause confusion rather than provide clarity. Axa backtracked significantly in its official statement on the criticism: For safety reasons, battery cells had not been used in the test car at all, the resulting fire was triggered in a controlled manner. And: "The crash test with a model of the Tesla brand also did not cause damage on the underbody of the car that would be likely to result in a battery fire, as the pictures suggest. The test carried out therefore did not confirm the hypothesis for this accident scenario."

All just staged with no relation to reality?

The statistics provided by Axa were also criticised. The accident statistics provided by AXA Switzerland also show that drivers of electric vehicles cause 50 percent more collisions with damage to their own vehicle than drivers of conventional combustion engines. The hypothesis: The so-called overtapping effect, the central element of the first crash test, could be the cause of the increased damage frequency in high-performance electric vehicles. The problem is that this phenomenon is not observed in Germany. "It's true that electric cars do not cause more accidents in this country, admits Nils Reich, Member of the Board at AXA in Germany. But they often lead to more expensive individual damage.

So we can conclude: The supposed "dramatic" crash was staged and clearly bears no relation to reality.

And now for the real weaknesses of electric cars

It is clear, however, that the underbody of electric cars is a weak spot. According to statements by the company in a press release, tests by the AXA accident researchers showed that underbody damage could occur when driving over road islands, stones or roundabouts. Although the drive battery is very well protected by additional reinforcement of the body at the front, rear and side, it still has a weak point. "The underbody seems to be the Achilles' heel of electric vehicles, because the battery has no additional protection there," warns Michael Pfäffli. Drivers of electric cars should take particular care on "road islands, stones or roundabouts to prevent damage to the underbody".

The second crash focused on the high weight of electric vehicles and its impact on the outcome of accidents. In the test, two VW Golf models hit each other at a speed of 50 km/h: A Golf 7 with combustion engine and an identical model with an electric drive. The major difference: Thanks to its battery package, the E-Golf is a massive 400 kilograms heavier than the combustion engine Golf. "The 1250 kg combustion engine is exposed to a significantly higher load in this crash and therefore suffers a visibly greater metal damage than its electric counterpart," is the summary. Although the lighter vehicle is at a disadvantage because the energy load is greater than with the heavy vehicle.  However, the situation is different when we consider personal injury: "The effective safety systems on modern vehicles can compensate for the effects of the difference in mass in most cases. The two passenger cells therefore remain intact in the crash shown. The occupants of both vehicles are therefore well protected and do not normally suffer any injuries."