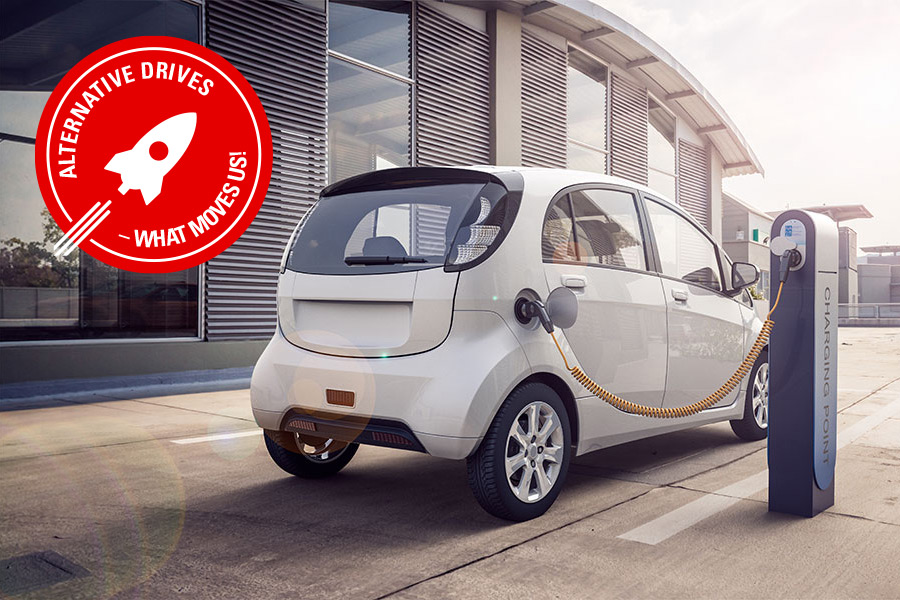 That’s how quickly electric mobility is developing! Will the breakthrough come in 2024?

It must have been around 2018 when an electric car was still a real rarity on Germany's roads. Now they are actually part of the common traffic. No wonder, especially since the German government's electric car subsidy introduced last year is giving electric mobility a real boost. The subsidies from last year have already created a new record: In 2019, more pure electric vehicles were registered than ever before with a total of 63,281. This year, new registrations are expected to continue to increase. A new study also predicts a breakthrough for e-mobility for 2024. But what is the current development in the field of electric mobility for workshops?

The market share of electric cars has been growing constantly for several years. In the past, these were mainly hybrid cars, i.e. cars where a combustion engine and an electric engine are combined, but pure electric cars are now also starting to achieve significant registration figures. The record year 2019 could be topped by the so-called BEV (= Battery Electric Vehicles, i.e. vehicles with electric engine and battery) this year.

Despite the corona crisis, over 8,000 BEVs were registered in June alone - an increase of 41 percent compared to the previous year. And because of the crisis, the German government increased the environmental bonus for electric cars and plug-in hybrid models to as much as 9,000 euros from 1 July. At least for electric vehicles costing a maximum of 40,000 euros. So the BEV share of new registrations is expected to remain high at least until 2021. The bonus programme will then expire. While the charging station infrastructure would still benefit from further expansion, an important point of criticism has thus been addressed - namely that electric cars are much too expensive: The environmental bonus means that a broader range of buyers can afford electric vehicles, at least temporarily.

But even without state subsidies, individual electric mobility will still become cheaper. In addition to their weight, battery prices in particular still cause headaches. However, a study by management consultancy firm Bain & Company predicts battery costs at just 85 euros per kilowatt hour for 2025. That would be around a third less than in 2018. And the study even expects the final breakthrough of electromobility in 2024.

If the development continues as it has been, around 500,000 pure electric cars will be on Germany's roads by the end of 2024. In the course of time, they will also become more and more prominent for independent workshops for maintenance or repair. So vehicle companies are not facing the question of whether they have to deal with the topic, but rather how they want to tackle the topic.

It is clear that workshop owners - yet again, you'd be forgiven for saying - will not be able to avoid making investments. Experts expect costs in the low to middle four-digit range to set up a workshop stations for relevant repairs. Work on electric vehicles is also heavily regulated. After all, making a mistake when dealing with the high-voltage system of an electric car can be fatal. Workshop employees must therefore obtain qualifications by attending special courses to ensure safe, professional working on vehicles with high-voltage systems and their components. You can find more information in our blog post „High-voltage qualification: This is how vehicle pros gear up for electric mobility".

But it is also clear that: Due to the simpler technology of electric cars and the elimination of combustion components and the conventional drive train, work volumes will be reduced considerably in part, but a shock may be avoided. Compared to combustion engine cars, the overall working values in the field of maintenance and repairs on electric vehicles will be somewhat moderately reduced. The study "Development of employment in after-sales - effects of electromobility" by the Baden-Württemberg Ministry of Economics and Finance predicts a decline of "only" around 13 percent. This may be painful for most companies, but is bearable with the right strategy.

On the other hand, electromobility also creates new potential for work. For example in the area of thermal management: In electric vehicles, power consumption and charging time depend largely on the outside temperature. Batteries not only supply less electricity in cold conditions, they can also be damaged when charging with high currents. As a result, sophisticated thermal management of the battery plays an important role and therefore promises new revenue areas.

Herth+Buss is also very closely following the development of electric mobility and is constantly working to adapt the product range to the new needs of drivers and workshops. NRGkick charging cables for electric vehicles are a good example. Alongside the type 2 plug for connection to the vehicle socket on the infrastructure side, these mobile charging stations are equipped with a red CEE 32 A connection plug with a significantly higher charging power. This means that charging is considerably quicker with NRGkick compared with the charger cables which are often supplied with electric vehicles. In practice, this means that a compatible electric car, for example, the Renault ZOE with a capacity of 24 kWh, will be almost fully charged within an hour when the NRGkick is used. With an emergency charger cable, this would take over ten hours.