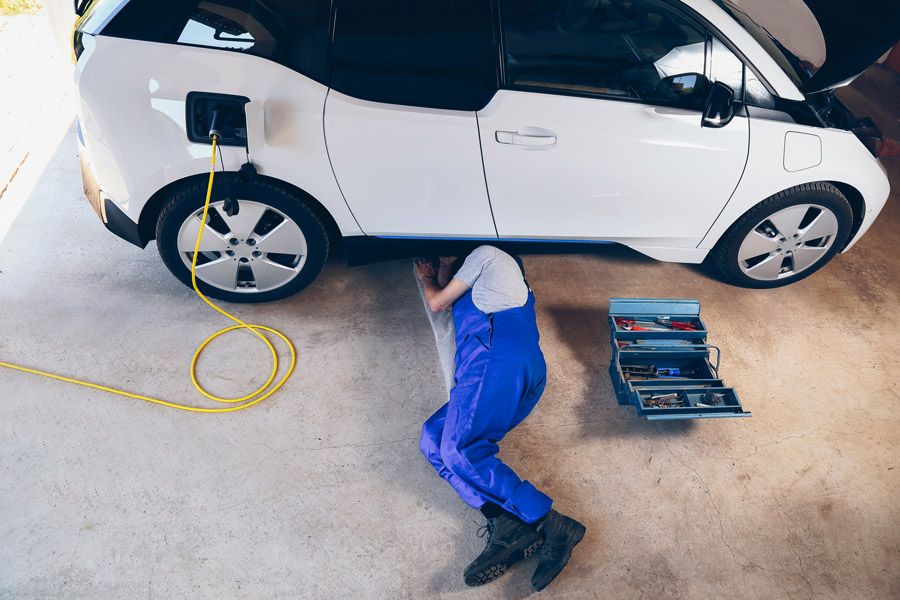 Repairs to electric vehicles: That’s how expensive they really are

Electric vehicles are known to be much less complex than their petrol and diesel derivatives. At least in terms of the drive train. Previous studies assumed that maintenance and repair of electric vehicles would be considerably cheaper in some cases overall. A new study has now come to a slightly different conclusion.

A study of the "Schaufenster Elektromobilität" initiative by the German Federal Ministry for Education and Research few years ago estimate that the work volumes in automotive workshops for repairing electric vehicles were over 60 percent lower than those for cars with combustion engines. Experts also assume that the costs in the field of maintenance will be lower: A study from this year showed that battery electric vehicles generate around 20 percent lower costs for spare parts than comparable vehicles with fossil fuels. The reason is clear: The greatest reduction in maintenance costs is due to the lower number of engine components in a BEV.

So are the costs higher or lower?

A recent study by the "Allianz Centre for Technology" (AZT) has now published slightly different figures. According to this study, repairs on electric vehicles are more expensive than for vehicles with diesel or petrol engines. This is primarily because the above-mentioned studies looked at average repair and maintenance costs over a longer period of time. The AZT study, on the other hand, only considers the costs for specific repairs. In its analysis of the study, the tech portal t3n.de emphasises, for example, "that electric cars are much more insusceptible to defects due to the lower number of wearing parts." So this always has to be taken into account in the overall assessment.

For the new evaluation of repair costs, real damage data from car owners covered by the AZT was evaluated. The results: In the period from 2018 to 2020, the average cost of damage on electric cars was around ten percent higher. For plug-in hybrids, the figure was even 50 percent. After a collision, the repair costs for electric vehicles were 30 percent higher.

The battery drives up the repair costs

Why is this? Carsten Reinkemeyer, Head of Safety Research at AZT, has a clear answer to this question: "The key difference is the heavy battery on the underbody, which has to be optimally protected against damage". The battery is not only extremely expensive. Car manufacturers also apply strict specifications for handling damaged batteries. In some cases, the battery must be replaced after collisions - even in the case of minor damage, in some cases even if the airbag has tripped. This drives costs up.

However, even comparatively minor damage can lead to immense costs. According to the study, a marten biting through a high-voltage cable, for example, can quickly cost up to 7,000 euros for the cable set to be replaced. According to auto-engine-und-sport.de, another cost factor is that "fire precaution measures have to be taken after a vehicle has been salvaged from an accident, as the batteries still contain energy."

In short: Due to the simpler drive technology, electric cars are fundamentally less susceptible to defects. But when something breaks, the costs quickly mount up.